Or, Attend the Event in Person

Here's what you get by ordering RnR 16

Have you ever wanted to get REVENGE with your fists against the old company you worked for? Or wanted to find an internet troll in real life and beat them into submission for a free lesson about RESPECT? That's what our RnR 16 main event is all about with JEFF NADU vs JERSEY JERRY... 2 brawlers from very different backgrounds with VERY real hate in their hearts for each other and everything that they stand for. It's bad blood VS blue collar determination, all rolled into 1 incredible showdown December 10th live on PPV.

And our feuds don't end there, with 20 matchups on the card including two rematches from RnR 15 with some of our fiercest fighters of ALL-TIME. Who will win the Women's Title when CHERRY BOMB defends her belt against HOT WHEELZ? Seriously, go fucking watch their fight right now from our last PPV to catch up, it was a literal flurry of fists for 3 rounds with reckless abandon and this next fight should be even more brutal. And which lightning quick striker walks away with the Lightweight Title when SCARFACE defends his belt against SHIZZAT DA RIZZAT? It's a Charleston legend vs The People's Champion with KO power on BOTH sides. Plus a few more rematches with our West Virginia locals, including the guy who spit on that other guy at the RnR 15 weigh in. No one hates each other more than those 2 maniacs.

So tune in on 12/10 for the best 3 hours of entertainment you'll watch in 2021... It's 20 fights, NO HEADGEAR, a live ring girl contest after the final bell, multiple title belts up for grabs, and the Charleston Coliseum crowd turned up beyond 11. Even we don't know what these brawlers & ring girls are gonna do when they step in that squared circle. Other than providing 1 of the funniest most action packed nights you EVER fucking see.

With your PPV order you also get an endless amount of laugh-out-loud commentary from our announcers Dave Portnoy & Dan Katz & Robbie Fox, along with Caleb Pressley & Adam Ferrone reporting live from the losing fighters corner, and Troopz giving replay reviews + possibly yelling at the refs. It's insane, unpredictable action. It's unparalleled absurdity. It is AMERICA. That is why we firmly believe there is NO better bang for your buck than ordering Rough N' Rowdy for your December 10th weekend.

Buy now and get 48 hour replay for your RnR 16 PPV aka the WILDEST mix of humanity you may ever see in a boxing ring or planet earth. 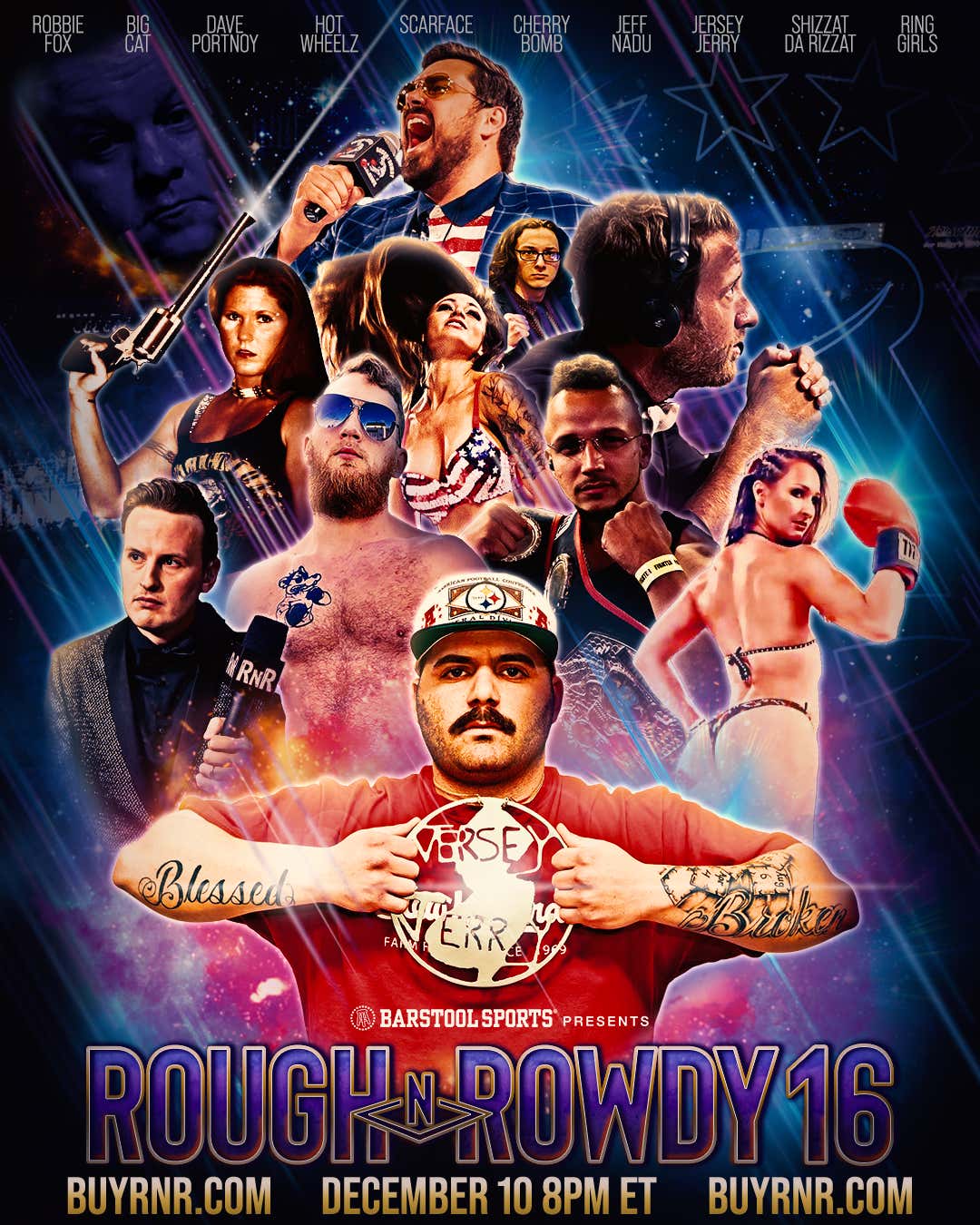 Feedback from past purchasers

This is 50x better than actual pay per views

This is the greatest thing barstool sports has ever done

Best commentary since vince mcmahon in the early 90s